Greetings one and all, and apologies for having spent the last however-many-weeks living like a digital hermit. I could attempt to explain but it might take too long, so instead let’s get to the Quorn mince.

I’ve been tinkering with creative writing for over ten years now. I came out of university full of Blackadder-like pomposity, believing I was going to write the genre-bending, mind-melding, magnum opus of our times. I spent a long time chewing pencils and staring whimsically out of windows, writing the odd ‘oh so witty’ sentence and feeling smug about it.

The problem was, it was crap.

And not even passable crap at that. It was the sort of stuff that even a phalanx of plumbers with Mario mustaches would struggle to push through the literary U-bend. No, it was no good. I told myself that if I wanted to improve as a writer, aside from reading more books, I’d have to stare out of fewer windows and meet more people in the same boat as me – fellow writers – and see if they had any ideas I could steal…erm…I mean, skills I could acquire.

So, I went looking for some.

Thanks to the interweb, finding a creative writing group is relatively easy, there’s hundreds of them, up and down the country, meeting in pubs, in village halls,  in people’s houses, in libraries. Some set exercises, some let you read your own stuff. If you’re tinkering with writing and have never been to one of these meetings – I urge you to go. They are both fascinating and inspiring in equal measure. Nobody will expect you to read on your first visit, so you can sit back and listen with immunity. And I reckon you’ll be surprised by what you hear.

The first writing group meet up I ever went to was in Stratford, held in a cellar beneath a church. I was fairly nervous about going, knowing that people were going to judge each others work. What if they didn’t like me? It was an impossibility, obviously, as I was writing a tour-de-force about some stoners in Southend at the time. How could any right thinking person not see that as something that would resonate through the annals of history? As I took my seat I cast a gaze around the room. Twenty or so people, all very friendly, they said hellos and how do you do’s and all that. They were mostly aged 50+, which made me think my stoner story was going to be too edgy for them. It had swearing. Drug references. Even some bad sexual puns. I was worried if I read it to them, I’d cause offence. So I was caught quite by surprise when the meeting was opened by a woman reading from her gay roman hardcore sorcery slash fiction thriller with the line: “I pressed my throbbing member against his virgin arsehole.”

Yeah, how’s that for a first line to hear in a room full of strangers? I looked up expecting the rest of the group, particularly the pensioners, to be shocked. Instead they nodded sagely, with a few making notes on a piece of paper. I guess the point I’m trying to make is that if you’re thinking of going to a creative writing group, leave any assumptions you have at home.

I went to the pub with the group afterwards and found them to be comprised of a fantastic bunch of people. Some were serious/professional writers with book deals and others hobbyists who just liked stories and had no literary pretensions at all. Over the course of a year I heard amazing poems, bizarre Dali-esque sci-fi, war stories, young adult novels of quests and kings and many others. It was great, and everyone had comments and useful feedback about what was working and what was not.

I couldn’t stay living in Stratford forever (see my book The Pirates of Maryland Point for an idea of what the area was like) and moved out to the murky suburbs of Essex. I worried that being outside of London I would struggle to find a group with the same depth of talent.

For the last five years or so I’ve been a regular member of The Chelmsford Writers’ Group and been left gobsmacked by the quality of the work people bring each month. There’s been ghost stories, post-apocalyptic fiction, superheroes, twists on Greek myths, alien invasions, hapless housewives, troublesome teenagers, reinterpretations of the nativity and even retro-gaming journalism. The collective enthusiasm and endless creativity of the group inspires me every time we meet and whether someone is a professional or amateur writer, everybody treats each other’s work seriously and with respect.  For me the support of the group has, more than once, been the thing that has reminded me that I love to write.

June has been a bit of a bumper month for the group. Several people have seen their books go into print and I’m pleased as punch for them. Have a nose and feel inspired. 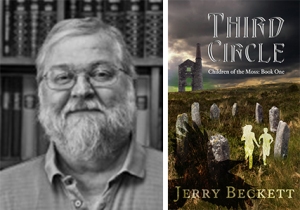 Jerry’s been a member of the Chelmsford Writers’ Group since the late 1980s. He has written four novels and has another on the way. He writes mostly fantasy, some of it comical. Third Circle is aimed at the 10-14 age group, which means I should be twenty years too old for it, but that’s not going to stop me grabbing a copy this week. He’s been drip feeding the group chapters over the last year or so, leaving us on cliffhangers each month, in fact it’s taken everything not to slap him and steal his laptop and read the ending. Thankfully I don’t have to do that now. I can read the whole thing in comfort.

A spirit of immense power is seeking to destroy our world. Our last defence lies in the weathered stone circles of Cornwall, but their resilience is failing as they crumble away. Karin and Denzil draw on the strength of their ancient blood to shore up the defences. Denzil is possessed by the spirit, and must fight against his sister as she strives to hold the weakest point – the Third Circle.

The Clock-Mender by Maggie Freeman

Maggie is a long-standing member of the group and when not penning her own stuff, she’s encouraging others by teaching creative writing. She writes widely, for adults and children, poems, short stories, and novels. The Clock-Mender is her third novel.

According to Maggie, The Clock-Mender is:

…a tale of love, crime and bloodshed in a small rural community in Sweden between the 30s and 50s. A clock-mender’s partner has a light-hearted affair with his best friend. But terrible consequences ensue.

And…it’s free this week on Amazon…so get downloading. A few moments ago it was as high as #496 in the Amazon Kindle chart.

Molly types at 3,000 words per minute. I haven’t seen it with my own eyes, but judging by the number of books she’s written (and the number of times she’s taken on NaNoWriMo and won) I doubt she knows how to type any slower. Quantity doesn’t come at a cost to quality either. Molly is a natural storyteller with an easy flowing style and she was recently shortlisted for the Wicked Young Writers’ Award.

Here’s the blurb for her novel ZA:

The Zombie Armageddon . . . yeah I know.

How unlikely is it, right?

“There are no such things as zombies.”

I’ve heard it all before, but I’ll never hear it again.

There are a few simple rules: Get supplies. Stay hidden. If they come, run. Fast.

After all, this wasn’t a video game and we only had one life each.

There you go, folks. Creative writing groups – bursting with talent and ideas. Here’s some useful links if you’re looking to join one:

Type stuff in this box and that... Cancel reply